Mustang Softball snagged a late lead and defeated North Paulding 8-5 on Friday, October 6th to win back to back region 3-7A championships. The game was tied at five with the Mustangs batting in the bottom of the sixth when an error scored two runs opening the game up.

Haley Glass was the winning pitcher. She allowed six hits and five runs over seven innings, striking out three and walking zero while also hitting a homerun in the win.

The Mustangs scattered nine hits in the game. Ansley Magee and Hannah Forehand had multiple hits and Boo Hudleston and Mallory Parker each had two RBI’s.

The Region Champs will host Woodstock in the first round of the GHSA state tournament this week. GO MUSTASNGS! 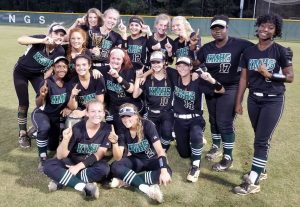