Congratulations to the Mustang Swimming and Diving team for their victory in the Spartan-Mustang Sprints on Saturday afternoon.  The Mustangs took first place in the boys, girls, and team competitions. 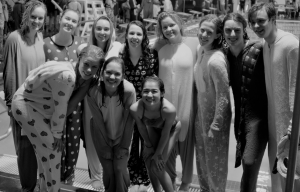 The Mustang boys won 6 of the 9 relays, while finishing 2nd in two others.

The boys 200 Butterfly relay of Ben McClain, Zach Lowe, Brett Reason, and Aidan Sherlock broke the school and meet record with a time of 1:40.39.

The 200 Breaststroke relay of Brett Reason, Adam O’Brien, Sam Wells, and Connor Haigh broke the school and meet record with a time of 2:02.11.  The previous record was set in 2011.

The girls won 3 relays, including the 8 x 25 Free Relay, the 200 Breaststroke Relay, and the 400 Free Relay, which gave the girls the meet victory.

This was the Mustangs 6th Invitational victory(out of 7 invitationals) this season, the most ever in the history of the program.

The Mustangs head to Georgia Tech next weekend for the State Championship meet.