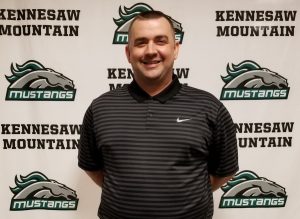 Coach Blair served as an assistant to KMHS coach Jesse Bonner for three seasons from 2013-2016 helping lead the Mustangs to 3 consecutive trips to state playoffs. Coach Blair has served as an instructor at both the NIKE Elite Hoops Basketball (2015-17) and the Mark Fox Basketball Camp (2016-17). While also assisting on the softball and baseball staffs at Kennesaw Mountain from 2009-2016.

Coach Blair will serve as a member of the special education department at KMHS. Welcome home Coach Blair!

No Events This Week

Events are added by athletic staff.
View All Events